in a wonderful park overlooking the beaches.

Villa Corallo is part of the district "I Giardini d'Aldia," a beautiful village composed of only single villas, built behind the beach of Lu Impostu and on a plot of land of about 32 hectares. It consists of a single building, built on two levels (ground floor and basement), with large sliding windows on both levels.

The villa is accessed by both pedestrian and driveway, through a corten gate, positioned in front of the villa. From the entrance gate, through small granite slabs placed on the lawn, one can reach the pool area and the living area on the ground floor, which enjoys a beautiful view of the sea.

Choose this villa and book directly on our official website: you will be able to take advantage of special rates and ensure a unique and personalised experience.

Learn more about the villa
Discover the rooms
The interior rooms

The living area is located on the ground floor and consists of the dining room and living room, combined into one large room and a kitchen equipped with all amenities, separated from the dining room by only three steps that place it at a slightly lower level than the rest of the living area. The four large sliding windows give the interior of the ground floor an intense and pleasant brightness and allow access to the large veranda and garden from both dining room and living room. The basement floor is accessible from outside the villa only, as there is no direct internal connection between the two levels, and consists of three double bedrooms, one for family use and four bathrooms plus one service bathroom, as well as the laundry area. Every room in the villa is equipped with air conditioning, which gives coolness during hot summer days. Both the ground floor and the basement floor have parquet flooring, which is fantastic to walk on barefoot, while windows and doors (both interior and exterior) are made of wood.

Continue
The exterior of the villa 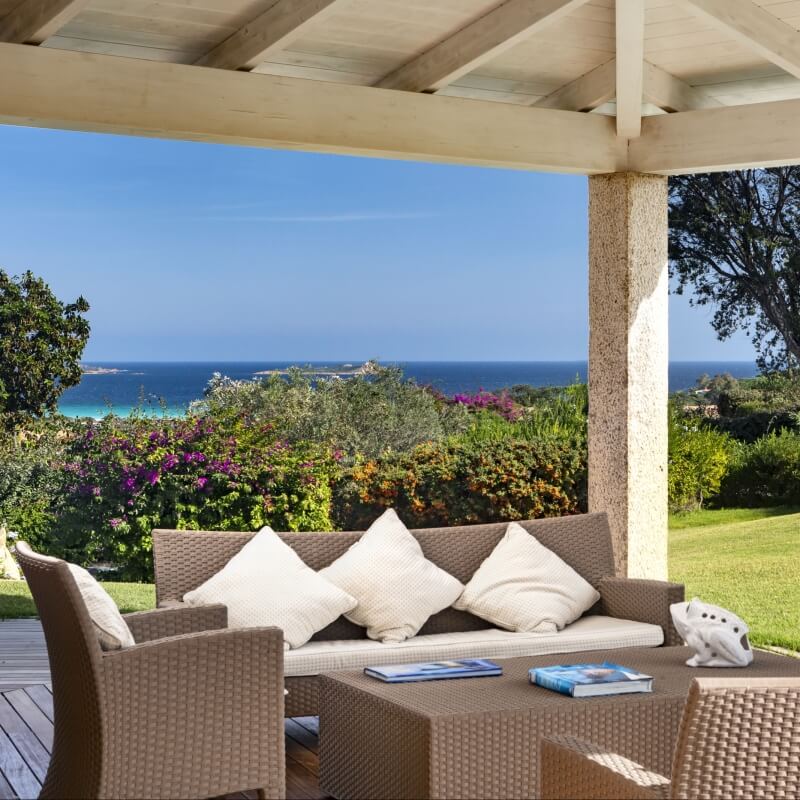 Villa Corallo, like the other villas in the district, is also architecturally reminiscent of the old Stazzo Gallurese, the typical Gallura dwelling of the past and characterized by its two pitched roof; of course, this architectural style has been skillfully harmonized with a touch of modernity, given by the large windows (the stazzo had very small window frames) and large verandas (the stazzo was without verandas). The very large veranda precisely, which surrounds the villa on three of the four sides of its structure, is the fantastic trait d'union between the outdoor and indoor environments, thanks to its versatility in use and thanks to its furnishings, since it can be used, for example, either for an aperitif before dinner or for the dinner itself with relatives and friends. The pool area, with sun loungers, is located to the right of the villa looking out to the sea and is only 15 meters from the villa itself. The exterior walls and roof of Villa Corallo are a hymn to the typical materials used by the ancient builders of Gallura, namely the queen stone of Sardinia, granite and coppi (tiles), totally recovered from ancient local buildings and reused in the roofs of villas like Villa Corallo.

The well-maintained garden, which is entirely covered with soft lawn and native plants such as strawberry tree, wild olive and myrtle, measures about 2,000 square meters.

The beach of Lu Impostu, which is about 1,000 meters from the villa, is characterized by very fine white sand composed of tiny grains formed by the natural erosion that has occurred over the centuries of the surrounding granite, and can be reached, through the internal road of the Village, by walking along a small path and a wooden footbridge adjacent to the Baglioni Hotel. This path is authorized and reserved for Village guests only. 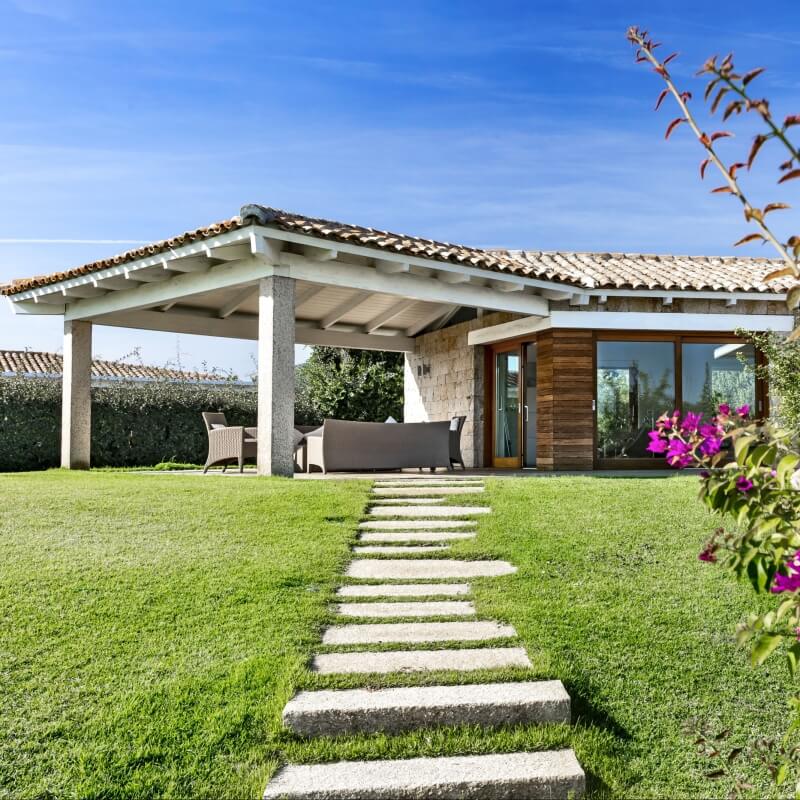